We take our core values and culture seriously. They drive everything we do. So far in our #ModelTheWay series, we’ve talked about those who inspire us with their “Leadership by Example” and “Relationships First.”

This month, we are focusing on tackling the task at hand. We’re all in. When called upon, we roll up our sleeves and rise to the challenge. Here’s who inspires our Tribe. 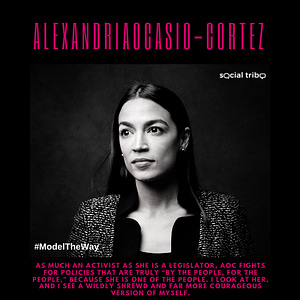 “I am inspired by New York congresswoman, Alexandria Ocasio-Cortez (AOC), the youngest woman ever to be elected to the House of Representatives. As much an activist as she is a legislator, AOC fights for policies that are truly “by the people, for the people,” because she is one of the people. I look at her, and I see a wildly shrewd and far more courageous version of myself. We both come from working-class families, entered adulthood in the midst of a recession, and developed a staunch belief in a better version of America for all of its citizens as a result. I see myself in AOC, and it’s a powerful thing to feel a kinship with someone who is changing hearts, minds, and policy, and inspiring a new generation of young Americans with a populist platform that lies at the intersection of economic, social, and environmental justice.

“I am inspired by Malala Yousafzai, Pakistani activist for female education, who also happens to be the youngest Nobel Prize laureate ever to date! I feel strongly about her platforms of gender equality and freedom through education, and her deep passion for learning has been an example to women worldwide. But beyond that, I marvel at her courage and resolve, and her ability to lead by example. I think back to what my psyche was like as a young teenage girl- ambitious and rebellious, but always held back by insecurity and fear, and I can’t help but use that self-reflection to marvel at Malala’s incredible achievements by comparison. Malala took a moment in her life that would paralyze the most courageous of adults – a violent attempt on her life – and used that experience to roll up her sleeves and rise to the challenge, channeling her passion to lead a movement. She’s served as an inspiration to a new generation of young women like environmental activist Greta Thunberg and I like to think that influence has also played a role in inspiring some of the young black women I’ve seen on social media leading protests for the Black Lives Matter moment. This is true Girl Power, raw, tenacious, and resolute.” – Tatiana Natzke, VP, Client Services, Social Tribe

“I am inspired by and have found myself admiring NASCAR. Once viewed as an exclusive sport, the large racing organization has made big changes. Everyone knows that drivers almost exclusively turn left – well, the changes they’ve made are akin to them not only turning right on a regular basis, while also in reverse. In the past few months, the organization has gone ALL IN, standing up in a big way to support social issues—holding themselves accountable, and putting their values above quarterly earnings and profits. ” – Alex White,  Account Coordinator, Social Tribe

No matter the task, our team will continue to go all in and work hard to achieve our goals. Who inspires you with their all in mentality?

Posted in Tribe Culture
← The Changing State of Social and the Metrics you Should be Measuring in the New Digital AgeMeet Your Tribe: Stacey →

View all posts by Robert Lisiecki →